Today marks the 200th birthday of the pioneering thinker and computer programmer, Ada Lovelace. Her impact on cultural and scientific production is clearly vast, vaster by far than we have time or space to go into here, but do have a look at this excellent piece on Ada Lovelace and the Imagination from the ever inspiring Brain Pickings. 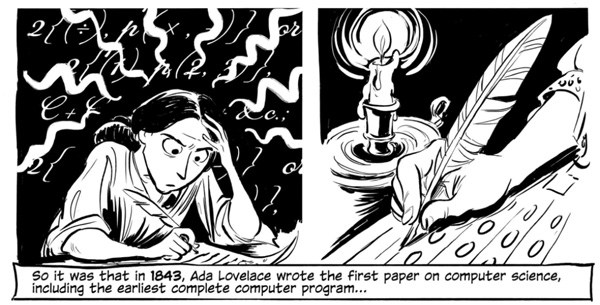 “It seizes points in common, between subjects having no very apparent connexion, & hence seldom or never brought into juxtaposition.”

There have been, and continue to be events in Oxford to celebrate this bicentenary year (and we’ve blogged about them before here), and a display at the Weston Library, Ada, Countess of Lovelace: computer pioneer is still running until 23 December, so if you’re in the vicinity, do have a look!

Ada’s position as computer programming pioneer is matched by the large prevalence of women involved in the early stages of the computer age. This NPR article, “The Forgotten Female Programmers Who Created Modern Tech” by Laura Sydell examines the reversal of this trend in recent years, and how computer science became a male-dominated field:

For decades the women who pioneered the computer revolution were often overlooked, but not in Isaacson’s book about the history of the digital revolution.

“When they have been written out of the history, you don’t have great role models…”

And, if her role as “the first computer programmer” and her incisive thoughts on the Imagination aren’t enough, she also predicted electronica:

“Supposing, for instance, that the fundamental relations of pitched sounds in the science of harmony and of musical composition were susceptible of such expression and adaptations, the engine might compose elaborate and scientific pieces of music of any degree of complexity or extent.”